I constantly mention my work with WYSIWYG editors and the fact I have my own CMS, in talks with other people. So, today I am publishing information about both projects:

I also updated other pages to link properly to both projects.

Any comments on my projects are welcome.

Today I finally managed to upload and release my latest project: PaintWeb. Marius helped me with designing the GUI and with other suggestions.

PaintWeb is a client-side Web application which allows users to draw online. It makes use of some newer Web technologies, mainly the HTML 5 Canvas 2D context API. Currently, it's in its infancy, but with lots of work planned ahead.

The major decision for me was to release this project as open-source, under GPL v3. The project is now hosted on the Google Code servers.

Please contribute with feedback, bug reports and even code - volunteers are welcome!

Lots of bugs in the Web application are already known, nonetheless that shouldn't stop you from reporting them.

The Web application works in the latest versions of Opera, Firefox, Safari and Konqueror. Obviously, it also works with any Gecko and WebKit based Web browsers.

Nightly builds of Firefox 3.1 and SVN trunk builds of WebKit have the best support for this Web application.

I'd like to mention that the greatest surprise to me was that the new Konqueror 4 has its own Canvas implemention. They've done a really great job!

I am looking forward to publish more information about the project and to continue work on it.

Update 3 days later: Back in september we presented PaintWeb at a local university-organised seminar. Today we have updated the presentation and we translated it to English as well. Go ahead and download the English or Romanian presentation.

I did publish my latest PHP script: the ReTidy page cleaner. The script allows you to clean HTML documents exported from word processing applications. For more details look at the ReTidy project page. 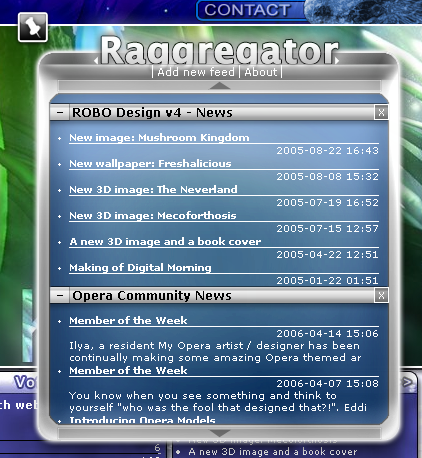 I named it ROBO Sticky (no good inspiration for a better name). To download, install and learn more about it, visit its "official" page.

The script is based on "Sticky-notes" by Antonio Orlando. I simply didn't like his source code. :) It adds a lot of "noise" in the DOM and I don't wonder why some people already reported it breaks Gmail.

My UserJS is almost an entire rewrite only for Opera, but it can be made to work on Firefox. Along the way I've made a lot of improvements, too many to list (bug fixes and nice behavior improvements).